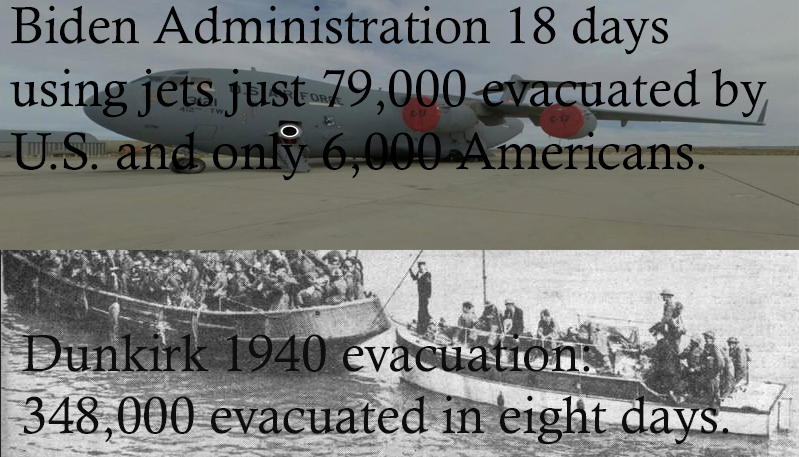 Junk Journalists repeat military and Biden’s claim they ran a historic evacuation. They forget the 1940 evacuation of Dunkirk – the British moved 5 times the people in half the time using small boats

Junk Journalists throughout the U.S. media are joining President Joe Biden in declaring the war over in Afghanistan, but the general leading the war did not declare it over. Unfortunately for the United States and the western world, Junk Journalists and the president are not listening to military leaders and it appears our military leaders lack the courage, to tell the truth.

When the headline writer at The Epoch Times wrote, “Last American Military Plane Leaves Afghanistan, Ending 20-year War: General“ and numerous others claimed United States Gen. Kenneth “Frank” McKenzie, Jr., declared the war in Afghanistan over, it is not what the general said. The Epoch Times‘ headline is just an example of many headlines published by a news organization. As often happens, the reporters of United States media corporations rushed to declare the war over. Even Fox News, Tucker Carlson declared the war over in his opening. At least Carlson had the sense to ask moments later, but “is it.”

These companies Walt Disney Corporation (ABC News), ViacomCBS, AT&T (CNN), NBC Universal (NBC News and MSNBC), and to a lesser degree Fox News Media (Fox News) long ago forgot the mission of journalism – to protect the people from those with the power to control them. The Society of Professional Journalists Code of Ethics states journalists should “Recognize a special obligation to serve as watchdogs over public affairs and government“.

Fox News broadcasts often align with the same goals as the other corporate media Junk Journalists. Fox News uses opinion shows to counter the Junk Journalism news coverage by stacking its opinion shows with hosts who clearly side with the Republican Party. American citizens don’t hear the truth, they just hear opinions. Now, many are giving up and don’t believe anything. It is so bad one side of the political spectrum denies facts and evidence while claiming to have those on their side.

This failure impacts our safety because those who watch corporate media think the war ended. But what did the leader, Commander of the United States Central Command McKenzie, actually say?

Not a single Junk Journalist asked, “General do you believe the war is over?” Does he believe there will be another “mission” to fight in Afghanistan to fight terrorism? The corporate-paid, authoritarian supporting Junk Journalists failed to ask if the Taliban agreed to stop fighting the United States.

Does the Taliban think the war is over? It was clear, the U.S. got no assurances that the Taliban would stop supporting Islamic terrorists – who, based on the attacks in Kabul, are still at war with the United States.

It is not likely the Taliban is done with the United States, up to the last days of the evacuation, the United States “mission” involved combat. Terrorists passed through Taliban-controlled checkpoints surrounding the Kabul airport.

If a war is over, the Biden Administration would not be talking about having an “over-the-horizon” capability. Junk Journalism does not ask if the politicians coined this term “over-the-horizon”. It has a focus-group/propaganda sound to it and is likely a political term, not a military term.

Throughout the evacuation, reporters on the ground in Afghanistan actually began reporting the facts even though their U.S.-based colleagues appeared not that anxious to report the failures of Biden’s policies. The Taliban blocked United States citizens and allies from reaching the airport so they could be evacuated. Despite this, McKenzie praised the Taliban and criticized the citizens who were unable to make the airport saying they waited too long to escape the country. However, McKenzie seems clueless as to the facts on the ground or he is lying to please political leaders. It was clear the Taliban was not allowing people who needed to be evacuated to reach the airport.

For example, Clarissa Ward of CNN is one of these reporters documenting the disaster. She described an entirely different reality. Her reporting is not likely to sit well with the board of directors at AT&T. Like other corporate paid reporters who won’t participate in delivering Junk Journalism, Ward could be looking for a job. She could be the next Sharyl Attkisson who resigned from CBS News after a 20-year investigative career because CBS News did not appreciate her truthful but unfavorable reporting of the Obama Administration.

“The numbers I provided represent a monumental accomplishment” he declared.

In his address to the nation justifying his decisions, Biden claimed the U.S. evacuated more than 120,000 people. The president claimed evacuation was historic. However, again he did not tell the American people the truth. Nearly half that number, according to McKenzie, were evacuated by “coalition partners”. Biden and the generals take credit for those additional evacuees claiming the U.S. was responsible for controlling the airport. Junk Journalists paid by AT&T, Disney, ViacomCBS and NBCUniversal Media report the higher number. Twitter, Facebook, Google, and Microsoft through their platforms assure the Junk Journalism will be seen by millions.

The generals and administration should not be bragging about their evacuation skills.

In eight days between May 27 and June 4, 1940, Britain evacuated Dunkirk beaches of more than 338,000 soldiers using mostly small boats owned by citizens. Germany’s army under Adolph Hitler drove the French soldiers and British Expeditionary Force (BEF) members through France to the shores of the English Channel. Biden, his generals Milley, McKenzie, evacuated just 79,500 people, most non-Americans using jets over 18 days. In addition, the generals left U.S. citizens behind billions in high-tech weapons and refused to arm and help the insurgency against the Taliban that is now forming.

For the most part, Junk Journalists failed to ask McKenzie if he feared that some of the 300,000 plus small arms including mortars and grenades might find their way into the United States for a Taliban “over the Southern U.S. Border operation.” The military knows Taliban soldiers are skilled at taking small munitions and turning them into deadly roadside bombs.

“Additionally, the ANA also possesses a variety of 80 and 107mm mortars, 40mm rocket-propelled grenades, automatic grenade launchers and anti-tank missiles. There are also a range of 7.62mm and 5.45 mm assault rifles, carbines and sniper rifles in its arsenal, all of which add up to a grand treasure trove of weaponry for the Taliban.”

Many of the weapons given to the Taliban by Biden could easily be smuggled into the United States. Junk Journalists don’t seem to be concerned. When a Junk Journalist asked about the weapons left behind, McKenzie spoke of the military’s effort to “retrograde” weapons. The general claimed the action made the weapons unusable for combat. The wise (wise in propaganda and not combat) McKenzie knew Junk Journalists would never ask how the military “retrogrades” small arms, rocket-propelled grenades, mortars, and man-carried anti-tank weapons.

The History of the Dunkirk evacuation: British Imperial War Museum

A real reporter: Clarissa Ward (CNN) reports Taliban is firing on crowds trying to get to the report.