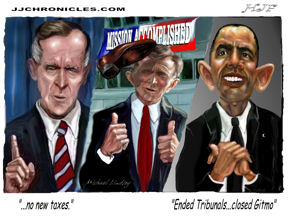 “No new taxes”, “Mission Accomplished”, and ”I closed Gitmo”, what is the difference between these statements. The Bush presidents were held to a single broken promise or exaggeration. President Obama has stated he closed Gitmo, it is still open; he claimed to create jobs, unemployment is 17 percent; he said he would never approve ear marks but then said all bills have ear marks; he stated that he would not insure illegal aliens but then had to admit he planned to; When will the lapdog media hold the new President to some level of accuracy?